When I was a little girl, I read a book written by a 10 year old girl from Sarajevo. Her name was Zlata and her diary painted an incredible picture of the lead up to and the majority of the Bosnian conflict, as the US has come to call it. Zlata’s astute observations shocked me, tore me out of my comfortable life in a Boston suburb and placed me directly in the middle of the siege of Sarajevo. She could have been my pen pal (remember when pen pals were a thing?) – only 5 years older and horribly wiser.

While in Aberdeen in April, I reread Zlata’s Diary, diving back into the siege. Zlata – incredulous at the start, watching as her land of country homes and ski vacations devolved into madness – a weathered veteran by the time a French reporter managed to extricate her family only three years later.

As a result, Sarajevo has always been somewhere I knew I needed to see. I’d follow news reports, many emphasizing the damage to the 1984 Olympic stadium, defunct and damaged less than a decade later. So when my good friends from home mentioned they had a wedding to attend in Sarajevo, we hatched a plan to travel there together.

A few years back I had heard tell of a thriving music and arts scene from two educators I had met in Helsinki. Sarajevo natives, they implored me to visit and see just how far the city had come. When we first spoke, I assumed they had escaped the city during the siege but this was not the case.

Nearly 14,000 people lost their lives during the Siege of Sarajevo. Notable for the insane amount of time it lasted (1,425 days), the siege was nearly a year longer than Russia’s horrendous Siege of Leningrad (today St. Petersburg). The break up of Yugoslavia was bloody and violent, pitting neighbor against neighbor. Half a million people were living in Sarajevo alone at the start of the war. Today the population is half that.

Driving into town, I expected to see a town still ravaged by war. The physical evidence of the conflict was still visible in parts of the town – seemingly random bullet holes pockmarked nearly every historic facade. I later discovered the main street we’d taken in from Mostar lead us in through Sniper Alley. 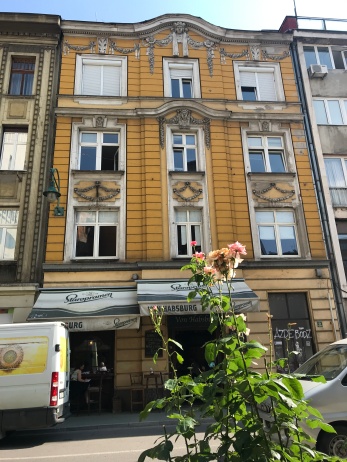 Sarajevo, a once glorious city of the Austro-Hungarian Empire, has a tumultuous past. I stood on the Latin Bridge, the site of Arch Duke Ferdinand’s assassination in 1914, the event that ignited World War I. The tiny Ottoman bridge hardly belies its reputation.

Likewise, the eternal flame downtown denotes not the 1984 Olympics but the victims of the Second World War, during which saw Sarajevo occupied by the Nazis and the fascist Independent State of Croatia. 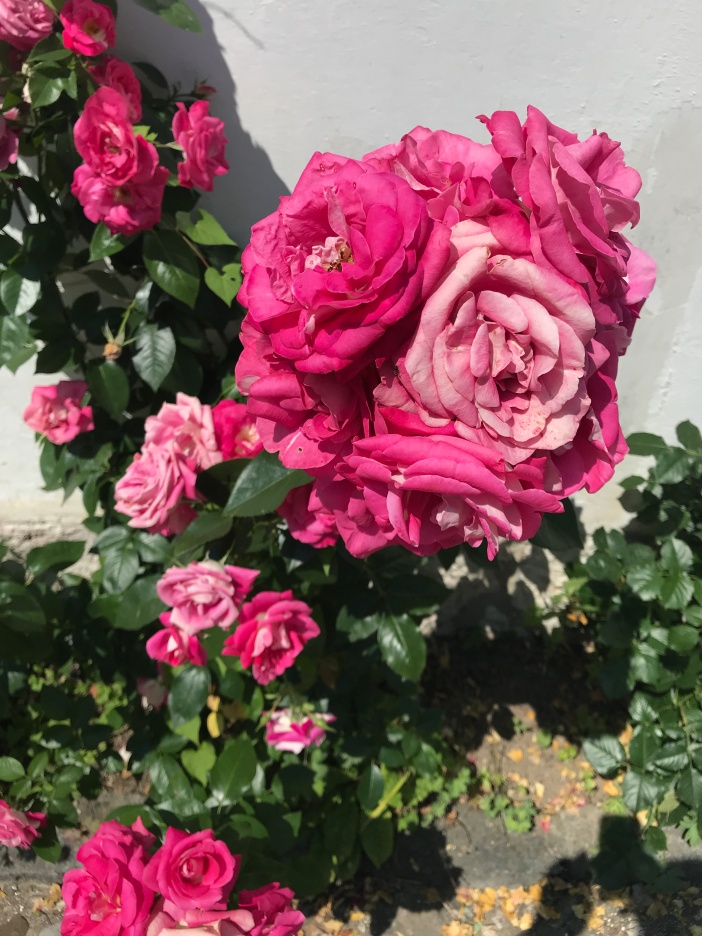 Beauty and softness are often found in places who have seen such terrible tragedy. Roses adorn the tree-lined streets. The unique architecture of Sarajevo – a place where Moorish (Spain) meets Islamic – is feast for the eyes. Unlike the Socialist industrial style apartment buildings which circle the town, the Old Town consists of one-story wooden buildings and dotted with mosques.

Bosnia and Herzegovina is a melting pot of religions. The people of Sarajevo are predominantly Muslim (85%) but mosques sit elbow to elbow with Orthodox Christian and Roman Catholic churches. Bosniaks are generally associated with Islam, Bosnian Croats with the Roman Catholic Church, and Bosnian Serbs with the Serbian Orthodox Church (source). There is also a Jewish population. From this population, the Sarajevo Haggadah came to national recognition.

A Jewish book of illuminated manuscripts – think the Book of Kells for the Old Testament – the haggadah was created in Spain and brought to Sarajevo sometime after the 1600s. Featuring pigments of lapiz and gold leaf, the text is absolutely gorgeous. I had the opportunity to visit the haggadah at the National Museum of Bosnia and Herzegovina on a tour organized by the bride’s mother. Incredibly, it survived the Nazi occupation, protected by the quick thinking of the museum’s librarian, who gave it to a peasant family living on his land outside of town who hid it under their floorboards.

On the same tour, we had the chance to visit Svrzo’s House, an Ottoman era home in Sarajevo owned by a Muslim family. The home featured areas known as haremlik (private area) and selamlik (public area), prevalent in upper-class family homes of the time. Stunningly beautiful textiles and rugs covered the rooms. I spotted a stove very similar to those in the Catherine Palace of St. Petersburg. The concave bowls provide more surface area with which to heat the room. 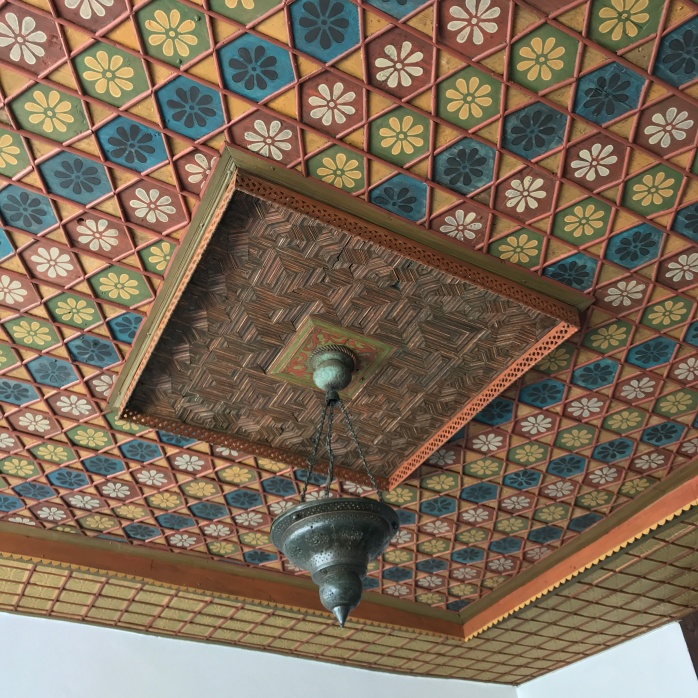 Possibly the coolest thing I did in Sarajevo was book a street art and graffiti tour through Sarajevo Funky Tours. I ended up with a private guide and driver who showed me around town for nearly four hours! Vanja, an art student turned illustrator, took me to all her favorite murals. Hearing the history from her point of view was fantastically interesting. 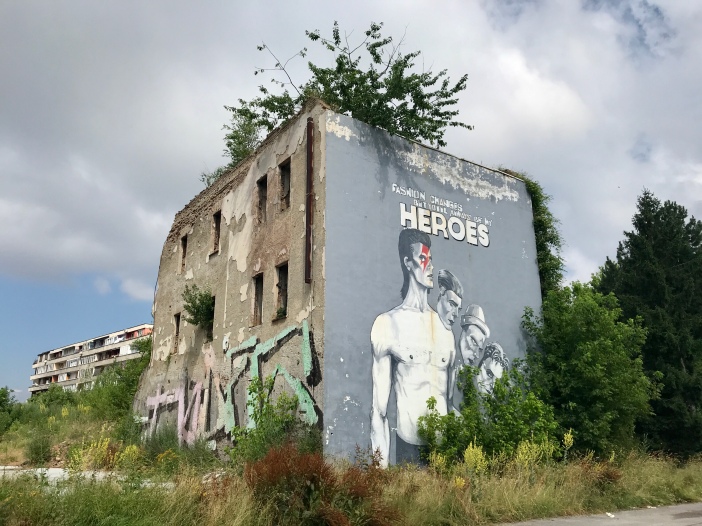 As a child, she experienced the war from an industrial town nearly an hour outside of Sarajevo. Very few people she grew up with are able to make a living in Sarajevo. In fact, she told me that there is an extremely high rate (80%!) of unemployed college graduates under the age of 30. College may be affordable but intellectual employment is hard to find. For a population whose parents worked the same Socialist-provided jobs their entire lives, the options are not satisfying. 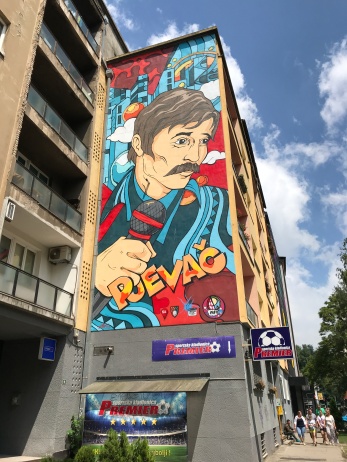 We capped off the tour at the Olympic bobsled park, high in the hills atop the town. A beautiful canvas for graffiti artists, the hills once provided shelter for snipers who carried out their reign of terror upon the town below. We even got to spray on the wall at the end. 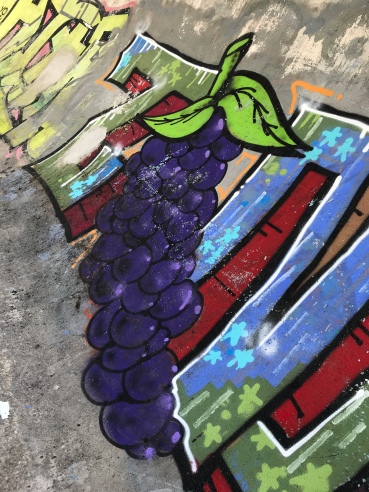 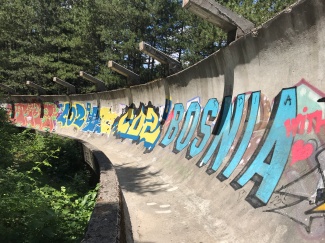 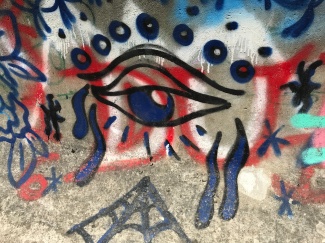 My time in Sarajevo was far too brief. With wedding activities (ie. delicious local meals in gorgeous locations) and a plane back to Boston I couldn’t see as much of the cultural underground as I’d hoped. But the trip has left me wanting more and resigned to return soon. This jewel of the Balkans has it’s hooks in me.