One of the best parts of living in Europe is being surrounded by the centuries-old architecture. Moscow, for its part, is particularly fond of Art Nouveau, a style that peaked in the late 19th Century. Full of swirls and stained glass, Art Nouveau can be summed up by its calling card, the Tiffany lamp.

It is at this point in art history where we find the Hotel Metropol, nestled in the heart of downtown Moscow. Dignified and imposing, the hotel sits directly outside the walls of Red Square.

The hotel has certainly lived its fair share of history. Since it opening in 1905, the Metropol has housed writers and revolutionaries, from Bernard Shaw to Lenin. Today it stands as a monument to a time just prior to the Russian Revolution, an era of extravagance and artistic strides.

Conceived by Savva Mamontov, patron of the arts – a William Merritt Chase, if you will – the hotel was originally planned as an opera house, a palace to showcase the talents of Moscow and host those from abroad. Though Savva did not manage to hold onto the hotel itself, he is considered the father of this dream. And what a dream it was.

For my part, I had only observed this beautiful building from outside. On an Art Nouveau Tour of Moscow this past spring, I was bitten by the idea to steal away a night at the Metropol. The iron gates beckoned and I couldn’t resist.

This past weekend, my plan came to be. I felt like Eloise at the Plaza as I walked into the gorgeous foyer of the hotel, all gold-encrusted and marble-floored. 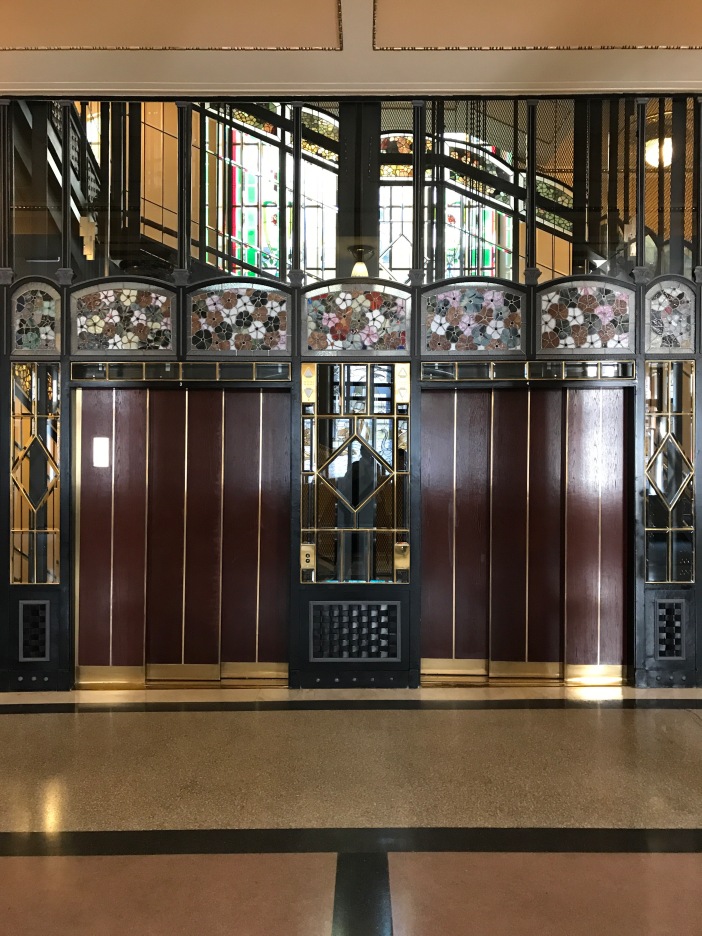 As I approached the stunning elevator bank, I had to stop and marvel at the stained glass above and behind, decorating the huge bay windows encircling the Grand Ballroom. 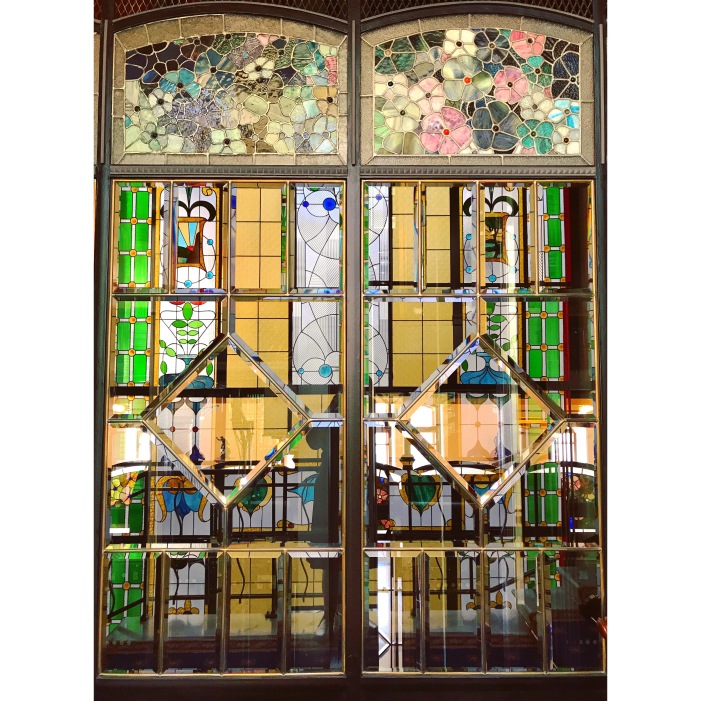 I’ve heard the Metropol described as a living museum, a Russian treasure. To do it justice, I had to spend a few hours wandering the halls, marveling at each new landing. From the stained glass to the rich carpets, the hotel did not disappoint. 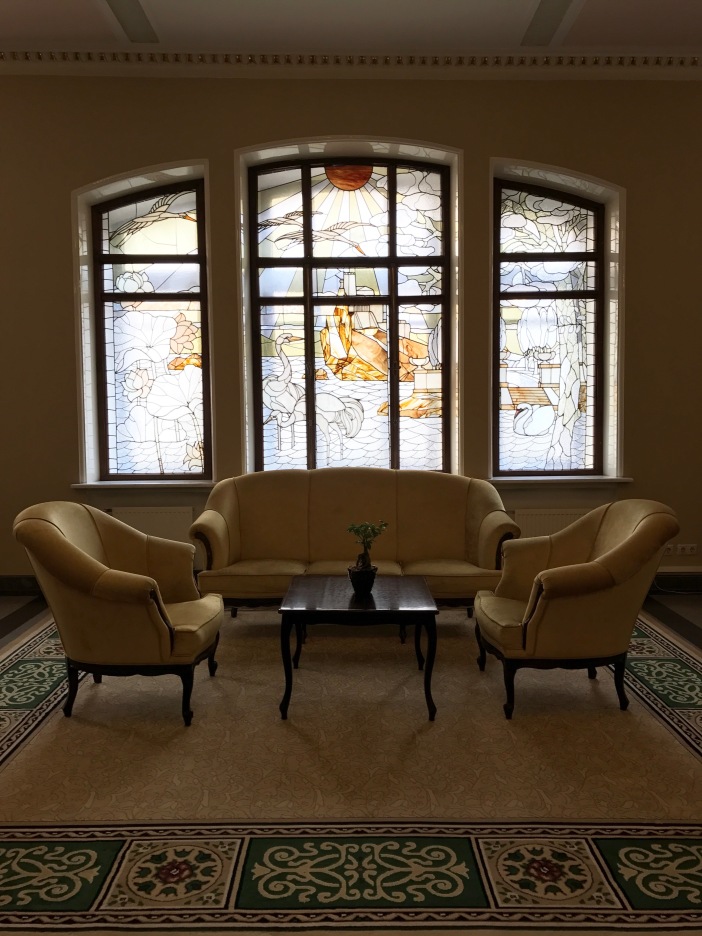 From my room I could see both the Bolshoi Theatre and the spires of the Kremlin. I wandered over to GUM Department Store, the former rubber and textile factory turned high-end shopping mall (think Gucci and Prada).

I watched fireworks above Red Square from my window and marveled at the beautiful touches of Art Nouveau dotting my room – from the chandelier to the window latches. I also bathed in the basement pool, enjoying its privacy and quaint atmosphere.

On Sunday morning, my friend Kelsey met me for brunch in the Grand Ballroom. We were both stunned as the hostess drew back the curtain, ushering us into a room which I can categorize as fit for the Titanic only (and built within 7 years of each other, no less).

We feasted on an amazing buffet and tried to take in the real delight – the exquisite glass ceiling above. A harp played in the corner and the scene could not have been more elegant. 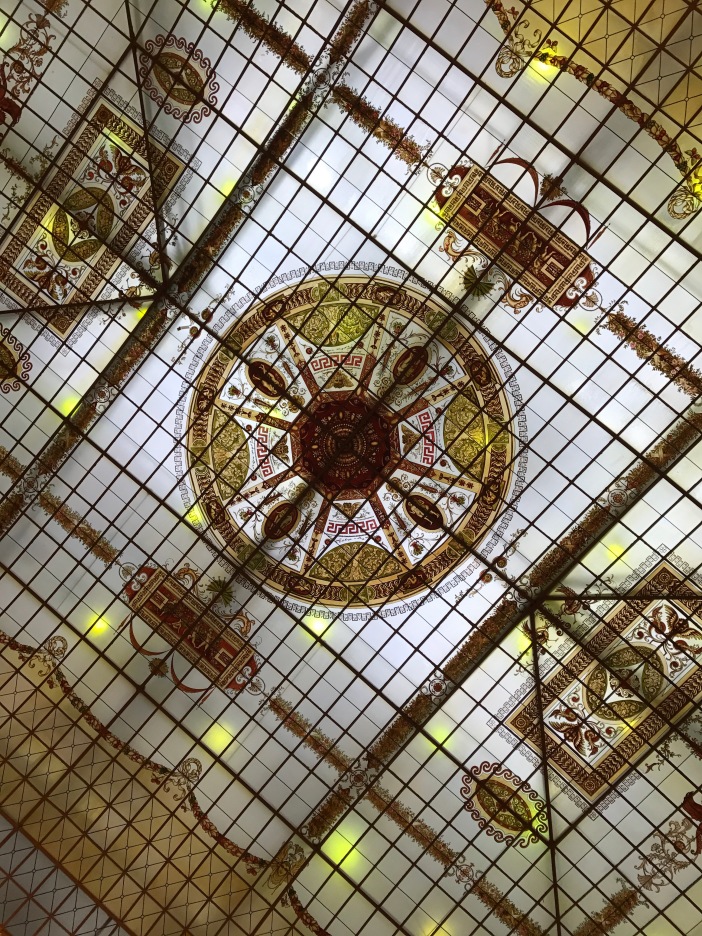 Full to the brim and feeling a tad like Harriet the Spy, we explored new wings of the hotel, seeking treasures which appeared at every turn. 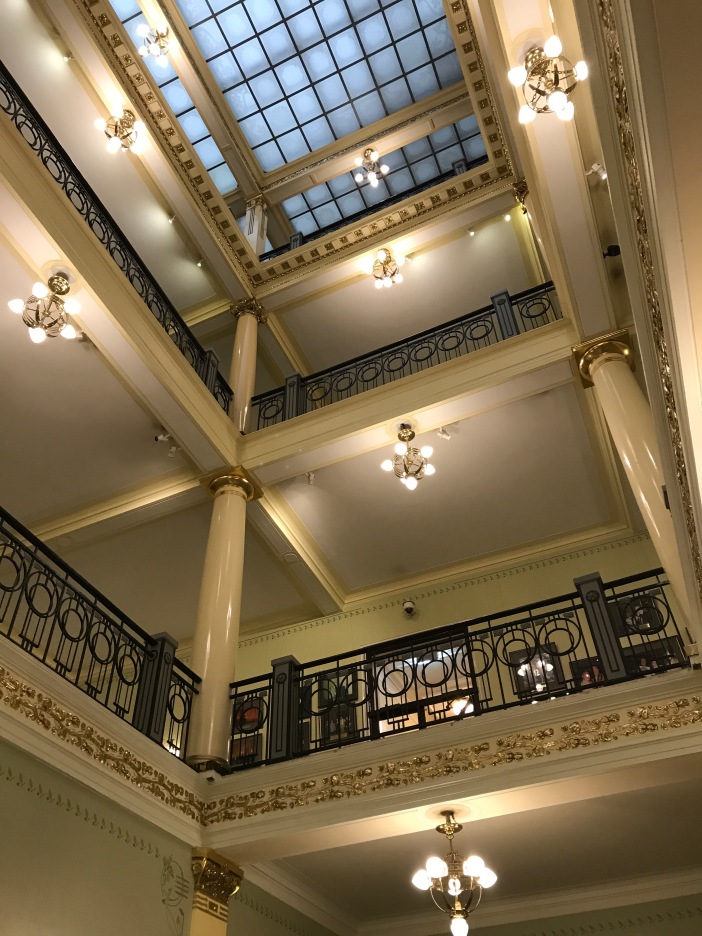 At the top of a seemingly abandoned staircase, we turned a corner and nearly jumped out of our socks – a stuffed bear blocked our entrance to a room fit for a duomo.

Bathed in shimmering red wallpaper, with an oculus adorned by a crystal chandelier, we had stumbled upon a room fit for the Tudors.

The whole experience was overwhelming to the senses and I’m still digesting. I’d very much like to return and continue studying as the place surely has more stories to tell. For now, I would highly recommend the Metropol as a stop on anyone’s tour to Moscow – for brunch at the least. Moscow has many more gems to share, no doubt, but I’m left in true awe after 24 hours in this one.

To read more about the extraordinary 110-year history of the Hotel Metropol, click here.

2 thoughts on “A night at the Metropol”